1963 year was the first of several different anodized skins. The source changed from several different suppliers which is why except for the end caps each trailer was made from the same roll as colors actually varied quite a bit from roll to roll. Not noticeable until you saw new Avions sitting in rows and then you could easily see the color differences (but only people would could see differences in the silver color) some people could see no difference but women could tell a great difference (something about men having different color rods in their eyes). The 1978-79 models had the lightest shades of Aluminum but were more sensitive to change due to less anodizing so they had to be carefully attended to with wax to keep that brightness which is why the earlier years were rather dark because they had longer and better anodization (opinions on color and harness vary). Anodization comes in Colors as you can remember the anodized Aluminum Drinking glasses that everyone used to have for summer time that came in different colors (anodizing) along with the pitcher. 1989-90 models are Electro-Coated (anodized by Electricity rather than an electric charged chemical bath) Generally you see this called E-coated (for Electro-Coated Anodizing). Also because of licensing varying from state to state many of the units are titled with the year being earlier or later than the model year. My 1964 titled Avion was a 1965 model but because it was made in 1964 the state of Minnesota licensed it as a Mobile Home manufactured in 1964. State of Wisconsin would have done the same thing back then. So that is why you see some things and models appearing off by a year as they are not licensed as cars by model years in many states. June was the first manufactured dates for most model years but they were still running the current years models when the new models were being made for the South Bend Trailer Show that used to be held over the 4th of July week at Notre Dame. Avion always had 2-4 models there and they had to be manufactured in June to make the show. The Avion Dealer in Elkhart always got those show models from the show. I would go there the week after the show to see the new models (basically fabrics).
If you want to know how anodized aluminum compares to Alclad Aluminum try polishing the door frame of your trailer. If you work hard enough you can get it shiny as glass. No matter how shiny it gets try to see how much effort it takes to keep it looking the same. Now imagine exerting that amount of effort to the whole trailer and you will appreciate what a good idea anodizing is for a trailer.

You can add HTML directly into this element to render on the page.

Just edit this element to add your own HTML.

The sealer of choice is Permacoat™ 62. This product is specifically designed for aluminum and delivers excellent results. It requires proper preparation of the surface before it is sprayed on. This method gives the satin finish that appears similar to a wet surface. It is a thin and delicate coating. If you scrub aggressively or use a squeegee to dry, it can remove the finish. The finish requires little maintenance. Washing once or twice a year unless you get muddy is all that is required. If the Permacoat 62 does come off prematurely you can successfully patch that area with a rag dipped into the product. Expect the Permacoat 62 to last 4 - 6 years and that you will pay $600 each time if you have it done professionally. I highly recommend professional application. Surface preparation is the key to success. Permacoat has been applied to coaches that were brand new and those that are old. If it was applied new and re-applied during its life the Avion looks like it is brand new. Older trailers will have effective results also. Expect the finished product to look as good as when you clean and wax.

These units shine up like an Airstream and are labor intensive.

here is the link to the web site that will show the technique and have all the supplies you need to get started. Click here

The classic look that most people associate with Avion. A satin finish.

Just as tempering makes steel stronger, anodizing makes aluminum harder and tougher.  It resists scratches, dents and abrasion better.  The aluminum is known as 5005.  The alloy content of anodized aluminums substitues magnesium for copper. To anodize the metal it is passed through a series of electroyloytic cells.  The current and temperature are carefully controlled to achieve to achieve an oxide coating of specific thickness and properties.  All metal, even aluminum oxidizes after being exposed to the elements. Anodizing is a method of controlled oxidation so that a uniform oxide coating is achieved.  The process adds a mil or two of thickness to the 30 thousands of an inch metal.  But it also impregnates tha aluuminum the becomes part of it.  The anodized surface is then sealed to give it permanent coloration.  Scientist compare the hardness of the surfACE TO THAT OF A RUBY.  iT IS A SATIN-LIKE FINISH AND IS NON-REFLECXTIVE. 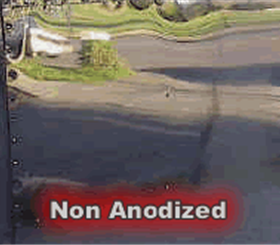 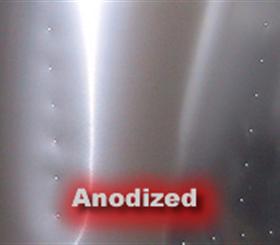 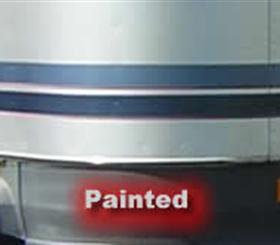 The aluminum exterior skin has changed several times in production history.  You must know what you have to maintain it properly.

​​Coat the Finish With Sealer

The battle ship gray was a cost cutting measure.