To finish my hunt for places where water might leak into my Avion, I decided to reseal all the roof seams. I found a marvelous product named Eternabond. Eternabond comes in 50 foot rolls and is a very sticky, 4" wide tape that can be applied right over exiting sealers (except silicone) as long as the edge of the Eternabond extends past the edge of the existing sealer. It can even be applied when the surface is wet and in cold weather. Not that that is a problem in Florida. It works just as advertised. Eternabond's normal color is white. In my view white would not look good on the roof of a silver trailer. I called the factory and found that Eternabond is available in 4" wide tape that can be covered with a silver UV protectorate coating. This is a great sealer and should last many years. The whole job cost less then $80.00 and took me about 2 hours to apply. Learn more about Eternabond on their web site.
I also filled the screw holes in the bracket with Parabond sealer before installing the screws.After the bracket was screwed tightly to the trailer, I spread a bead of Parabond sealer around the entire border of the bracket. While you are at it you might as well reseal the rear bracket as well. Removing and resealing the awning brackets took about 45 minutes. It is an easy job and well worth the effort. The awning will have to be extended position to remove the brackets. Another place water is inclined to leak into an Avon is the rail that supports the front window stone guard. This is an aluminum strip that acts as one half of the stone guard hinge. Grab the aluminum hinge that is riveted to the skin of the trailer and try to move it. If it moves, water may be leaking though the rivet holes that hold the aluminum hinge to the trailer. Cayo's recommendation was, "do not remove the original rivets." He suggested the best way to address this problem is to tighten the hinge by using pop rivets between the existing rivets, then seal the entire perimeter of the strip with Parabond sealer. Don't forget to seal the new pop rivet heads.

Zipp Dee Awning Brackets and the rail that supports the stone guard . 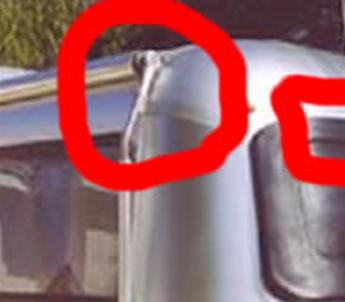 According to Chuck Cayo, the Classic Avion has two places that are notorious for leaks. One place is the ZipDee awning brackets. These brackets are located near the roof line at each end of the awning. The brackets lock the awning in place when it is in the "stored" position. I found two rivets were drilled out to allow the awning bracket to fit snugly against the aluminum skin. The rivet holes were not sealed. I removed the bracket (There are three stainless steel screws holding the bracket to the trailer) I cleaned both surfaces and used Parabond sealer to seal the rivet and the screw holes. Then I spread Parabond sealer on the back of the bracket and reassembled the bracket to the trailer.

The sealer of choice is Permacoat™ 62. This product is specifically designed for aluminum and delivers excellent results. It requires proper preparation of the surface before it is sprayed on. This method gives the satin finish that appears similar to a wet surface. It is a thin and delicate coating. If you scrub aggressively or use a squeegee to dry, it can remove the finish. The finish requires little maintenance. Washing once or twice a year unless you get muddy is all that is required. If the Permacoat 62 does come off prematurely you can successfully patch that area with a rag dipped into the product. Expect the Permacoat 62 to last 4 - 6 years and that you will pay $600 each time if you have it done professionally. I highly recommend professional application. Surface preparation is the key to success. Permacoat has been applied to coaches that were brand new and those that are old. If it was applied new and re-applied during its life the Avion looks like it is brand new. Older trailers will have effective results also. Expect the finished product to look as good as when you clean and wax.

Every restoration I see has  leak repair as part of the story.  Often the biggest and most challenging .  Bill Rahm provides some heads up to do maintenance before things get out of hand.